.ART Digital Innovation in Art Nominee, Eugene Bogorad: "Being online is a way of being free" Eugene Bogorad is a startup founder like no other. He has tried many, many different things. After having been involved with computing back in USSR, Israel and the UK, he started a technology business. Later on, he tried himself as an editor of a sci-tech magazine, worked for the largest legal firm in Russia, consulted on legal and IP rights and even used to be a political operative. He knew what “big data” was before the term was even coined. And now, Eugene has ventured into the world of art, inspired by the idea of bridging the online and the offline realms on a local basis.

His startup ArtWalls brings together creators, audiences and public spaces. The idea is brilliantly simple. Millions of aspiring creators have zero access to ready buyers, their name isn’t recognized yet, they have no way of monetizing their work. By negotiating with local public spaces – restaurants, cafes and office buildings to exhibit the work of aspiring artists  – ArtWalls turns general public into potential audience, while bringing them original artwork to replace generic IKEA posters. Although in its early development stages, the project had a successful take-off and is already live in Barcelona, where Eugene lives.

In a way, the idea behind ArtWalls was inspired by the experience of early impressionists who exhibited in various cafes across Paris to attract attention to their work and earn some money.

“I’m an amateur photographer myself, so I know how it is. When I met up with a friend of mine recently, she said that photography is the only thing she wants to do but it’s not viable as unless you do lots of weddings, or you are in the top 1%, you can’t support yourself. So, I told her – why don’t you go talk to the manager of a local restaurant and see if he wants to exhibit you? But she is shy, and she didn’t want to go through the communication and negotiation processes. That’s when I realized that I could create an online platform which brings together the mangers of public spaces and local artists to make profit for both of them. Overtime we also want to involve art schools and have all student artwork on offer too”. 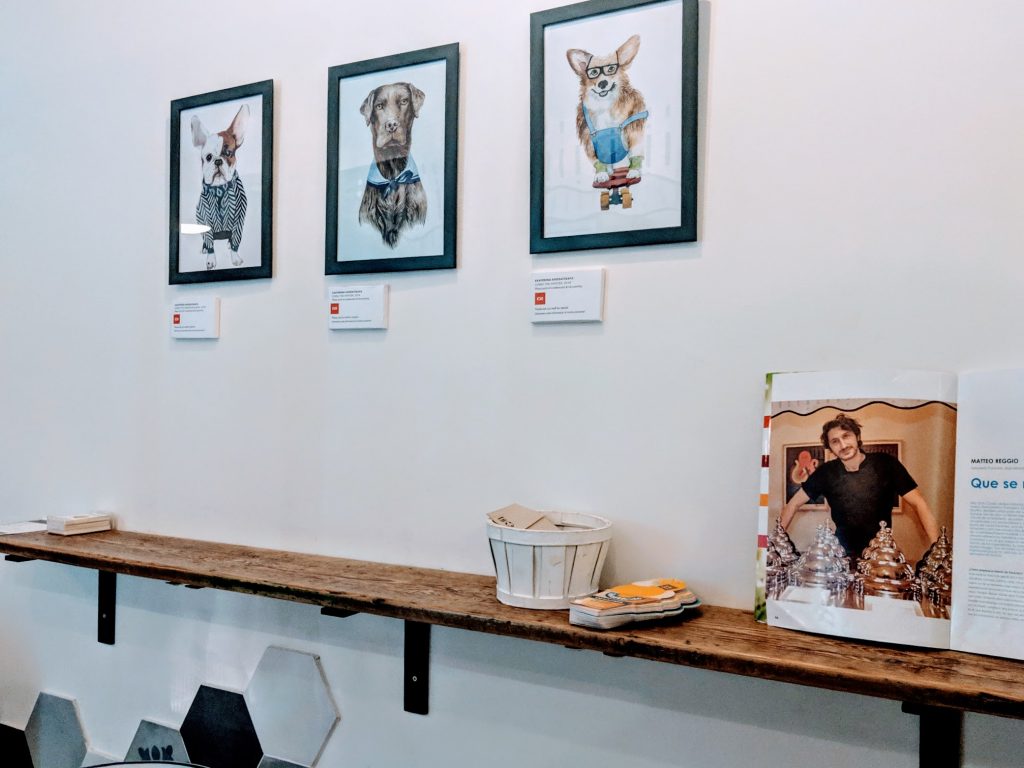 Buying art shouldn’t be much harder than getting a latte!

With so many online galleries and evolving digital art around, it seems there would almost be no market left for the kind of project that’s heavily reliant on the offline. However, it’s the opposite.

“There are a lot of online galleries, of course. But it’s a totally different type of public. People who shop for art online are mostly connoisseurs, they are looking for something specific and there aren’t that many of them. On the other hand, lots of people go to cafes. They aren’t going to be there to find art, but they are relaxed, opened to the experience and they can just take the art piece off the wall after having scanned its QR-code. I expect impulse buying to be huge, and that’s not a bad thing”.

To be somebody online you need to spend a lot of money of publicity. But if you are on every wall of every restaurant people will see you anyway. And if an app can help with it – all the better.

As for digital instruments changing our lives, they already have. “My whole life is online. Communication, planning, productivity, payments, finance. Even my main bank is completely online, it doesn’t have offices. There is already a reasonable percentage of people who can live anywhere, like me. You don’t have to go to the office to have a job. Digital instruments have changed everything. Being online is also a way of being free, which is something very much in demand right now. In the physical world there are governments and laws restricting your freedom, but online you can be anonymous, you can do business and be free there”.

And so, it seems the only way to move forward is to embrace the digital realm, linking it to the offline in a masterful way – just like ArtWalls does. .ART Award for Digital Innovation in Art – past nominees

Digital Innovation in Art award has been supported by .ART for three years. The Award recognises the innovators in the... #News & trends
Red T Multiples: Digital Innovation in Art Award Nominee 2021
This website stores cookies on your computer. These cookies are used to collect information about how you interact with our website and allow us to remember you. We use this information in order to improve and customize your browsing experience and for analytics and metrics about our visitors both on this website and other media. To find out more about the cookies we use, see our Privacy Policy.