Featured Image: Works from Hirst’s collection to be burned until the exhibition closes on 30 October

Countess of Wemyss and March is suing Simon C. Dickinson Limited after the dealer purportedly resold a Jean-Baptiste-Simeon Chardin painting for millions more than £8 million in 2014 after the family claimed the original sale was rushed for £1 million. The family, one of Scotland’s wealthiest, claims that the deal was conducted in an ‘unprofessional and shoddy manner’ with inadequate research undertaken which centers on a version of Chardin’s “Le Benedicite”.

The Earl and Countess of Wemyss and March arranged for a private adviser to sell a version of Chardin’s “Le Bénédicité” from their family collection in 2014, before it was discovered to be an 18th-century original, a High Court was told this week.

The case focuses on the ‘prime original’ of “Le Benedicite”, of which hangs along with another version in the Louvre with a third version in the Hermitage in St Petersburg, Russia. The court was told the re-sale came after the painting was cleaned, a ‘Chardin’ signature was discovered, and an expert hailed it as a ‘fully autograph masterpiece by Chardin himself’.

Lady Wemyss and fellow trustee Vilma Ramsay, are arguing that the trust is entitled to the difference between the July 2014 price and that which would have been obtained if the painting had been sold ‘as a Chardin at its actual market value’.

Andrew Onslow KC, representing the trustees, said in written arguments that the sale was done “without any effort to market the painting, let alone efforts which met the standard of the reasonably competent international art dealer entrusted with such a sale; and without any real disclosure or explanation of the approach being taken” and that “The likeliest explanation … appears to be an initial failure of research, a fixed but insupportable view of the leading expert’s opinion of the painting … and Mr Dickinson’s unjustified assumption of the role of expert arbiter.”

The trial before Judge Simon Gleeson, which began October 6th, continues, with a ruling expected at a later date. The Countess of Wemyss and March alleged that the original sale of the painting was conducted in an ‘unprofessional and shoddy manner’ CREDIT: James Manning/PA Wire

Damien Hirst has begun burning hundreds of his own artworks after selling a series of NFTs. The artist told buyers who bought pieces from his latest collection to choose either the physical artwork or the NFT representing it. Those buyers who chose the NFT were told that the corresponding original work would be destroyed.

Similarly, collectors who bought one of the artist’s NFTs from the artist’s “The Currency” collection, which was made up of 10,000 NFTs had to choose between keeping the NFT or swapping it for the physical artwork. According to London’s Newport Street Gallery, 5,149 buyers opted for the original artworks while 4,851 chose the NFTs, costing approximately $2,000 each.

Livestreaming the event, the artist was dressed in a silver metallic boiler-suit trousers and matching fire safety gloves Hirst said: “It feels good, better than I expected” while burning the works.

It has been estimated the works being burned are collectively worth almost £10 million however the artist was quick to correct the estimate, stating: “A lot of people think I’m burning millions of dollars of art but I’m not…I’m completing the transformation of these physical artworks into NFTs by burning the physical versions.” A rare Roman nearly completely intact mosaic has been uncovered in Rastan, Syria. The 1,600-year-old mosaic measuring 65.5 x 20 feet, was found under a building in Rastan near Homs, which was held by rebels in the civil war until 2018. After more than a decade of war, many of the countries treasures have been damaged, destroyed or lost, but the mosaic is being hailed as the most significant discovery since the start of the conflict 2011.

The mosaic was uncovered in an old building that Syria’s General Directorate of Antiquities and Museums had been excavating. Lebanese and Syrian businessmen from the neighbouring country’s Nabu Museum bought the property, which dates back to the 4th century, and donated it to the Syrian state. The work features mythical scenes including the Trojan and Amazon wars, portraying the Roman sea god Neptune and 40 of his mistresses, as well as Hercules slaying the Amazon queen Hippolyta.

“What is in front of us is a discovery that is rare on a global scale,” Hamman Saad, a senior official at Syria’s General Directorate of Museums and Antiquities, told the Associated Press. He continued, “We can’t identify the type of the building, whether it’s a public bathhouse or something else, because we have not finished excavating yet.” People look at a large mosaic that dates back to the Roman era in the town of Rastan, Syria, October 12, 2022.

A Claude Monet and Joan Mitchell retrospective is opening at Paris’ Louis Vuitton Foundation. Spanning across eight galleries, the unprecedented exhibition offers visitors an immersive journey through 70 iconic works by both artists. Although many scholars have compared the two artists in relation to the artist’s use of colour and nature, the comparative exhibition has never been organized before. The exhibition brings together two exceptional bodies of work: Claude Monet’s Agapanthus triptych (ca. 1915-1926), which is exhibited in its entirety for the first time in Paris in over 60 years, and Joan Mitchell’s La Grande Vallée, one of her most important series.

Running concurrently is an exhibition of Mitchell’s works at the Foundation. “We chose to organize a Joan Mitchell retrospective because, 30 years after the death of the artist, it seems that she is still one of brightest figures in painting from the second half of the 20th century,” says Olivier Michelon, the Chief curator of the Louis Vuitton Foundation.

“It was also an opportunity to give Joan Mitchell her own space, so that visitors who are less familiar with her than Claude Monet, can discover her work which developed over around 40 years,” he added.

The exhibition opened October 5th and runs until February 27th, 2023. 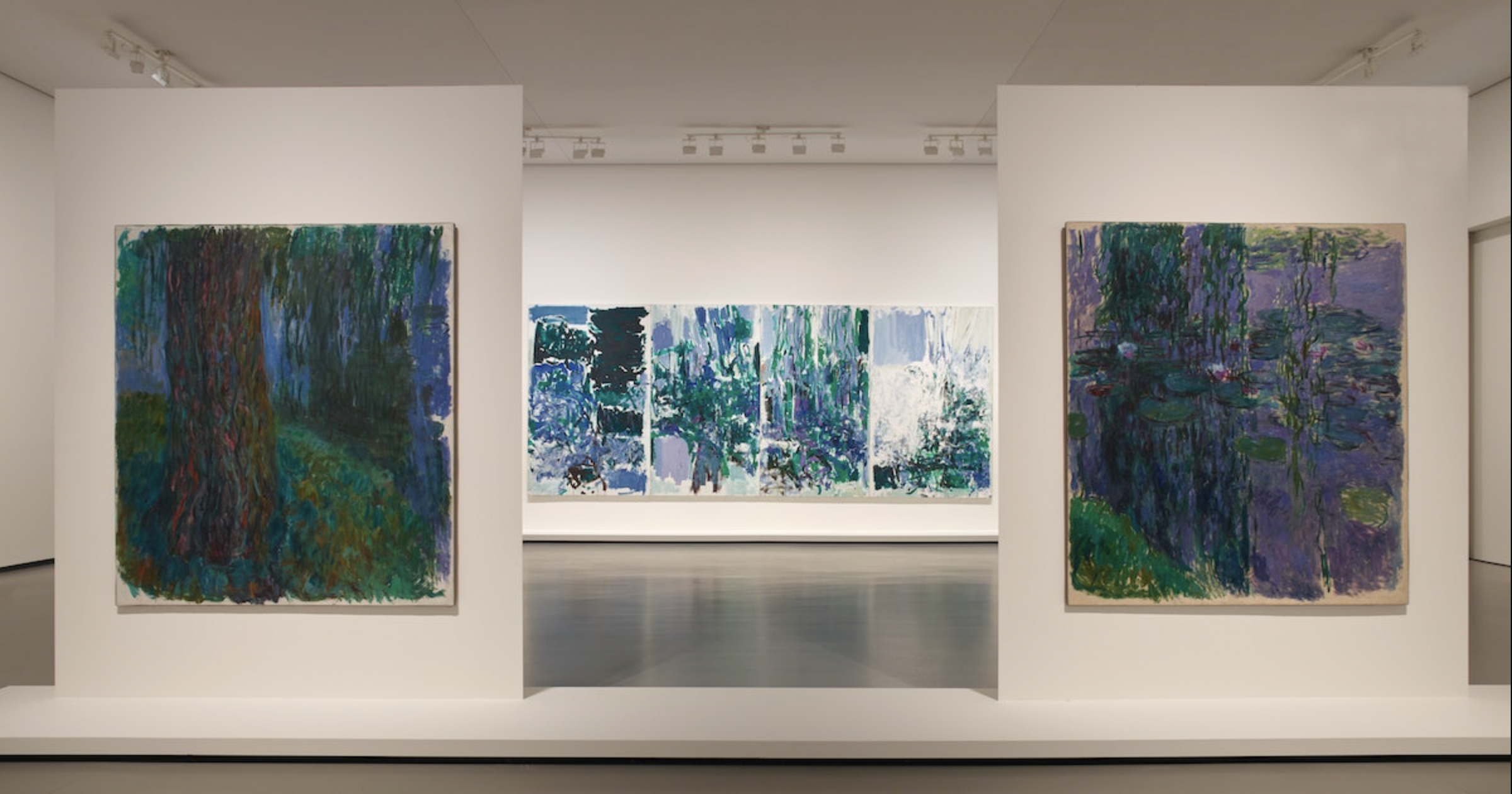 An exceptional Piet Modrian is headed to Sotheby’s New York’s forthcoming Modern Evening Auction on November 14 and is poised to fetch $50 million. The work, “Composition No. II” (1930) has already held the record for most expensive Mondrian ($2 million in 1983) and is expected to break the record for a work by Mondrian, which was last set in 2015 when “Composition No. III, with Red, Blue, Yellow, and Black” sold for $50.5 million.

The work has been favoured as a star lot in the sale for its rareness as an important piece of Mondrian’s mature period of the 1920s and early 1930s. Many of comparable works are held in institutional collections and thus has positioned the painting as unique opportunity for an auction offering. The work also features a balanced use of red, yellow and blue in addition to the central black grid patterning, hallmarks of the artist’s best-known works. Particularly the artist’s use of red in the work is more prominent in the composition than many works offered at auction in the past.

“Composition No. II is an undeniable masterwork by the artist, bearing the signature hallmarks of Mondrian’s groundbreaking, elemental approach to composition – black lines, forms of primary colors, and geometric precision,” says Oliver Barker, Sotheby’s Chairman of Europe, in a press release. “The work hums with an electricity that mirrors the energy of painting in Europe at this time and remains as vital as it did when it was painted nearly one hundred years ago.” #Blog
Why do you hate my people? Reflections on International Holocaust Remembrance Day. #Blog
Best Ways of Making Your Artist Website Stand Out

#Blog
Present the Future: The World’s First NFT Art Residency
This website stores cookies on your computer. These cookies are used to collect information about how you interact with our website and allow us to remember you. We use this information in order to improve and customize your browsing experience and for analytics and metrics about our visitors both on this website and other media. To find out more about the cookies we use, see our Privacy Policy.