SHARE
Ahead of the shortlist announcement this September and the Award Ceremony on October 14th, we highlight the great projects and businesses that have entered the Digital Innovation in Art Award. Brace yourself - the competition is unprecedented! Everyone loves a stunning LED piece, and Color + light have mastered the art of beautiful lighting. But imagine for a moment being able to bring such a piece back home. That’s exactly what Aaron Oppenheimer, founder of Color + light, aims to do with their new product: Fluora, your personal LED houseplant /lamp. 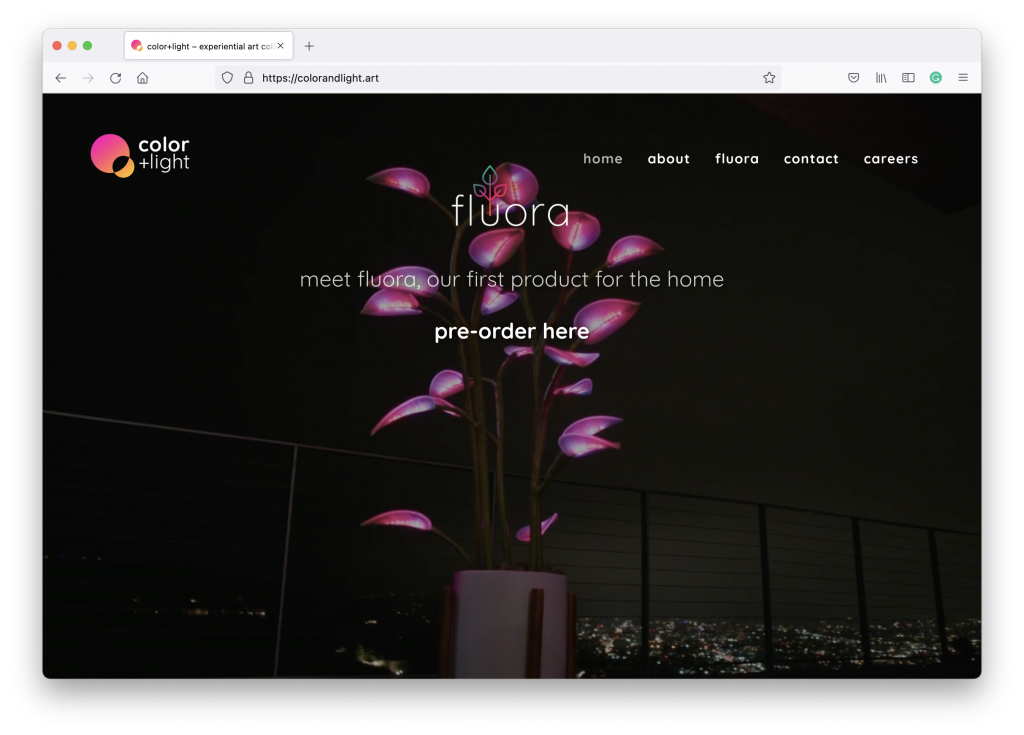 With Fluora, light isn’t just a utility. It’s a scene-stealer. With its realistic natural plant form and immersive, precision-tuned lighting system, Aaron Oppenheimer promises that Fluora will bring your space to life in more ways than one, and it truly does. After all, Color + light are no strangers to designing beautiful LED installations: their artists and engineers have created over $10m of mesmerizing 3D LED Art Installations and experiences all over the world, from Oslo to Honolulu. Now, they are focusing on Fluora, which is a proof of concept for the future of home and indoor lighting — a dynamic canvas with incredible integrations.

“Globalization, decentralization, and the digital work from anywhere revolution is creating an explosion of new creative energy. With NFT’s, digital artists finally have a platform to be able to support themselves. Creation tools are becoming mature, as are ways to display digital artworks. We are in the midst of a revolution of what is possible at the intersection of art and technology.”

Notable early adopters of Fluora include top influencers and Youtubers such as Pokimane (7.8m followers), GibiASMR (3.3m followers), as well as Tech Tesseract. Color + light hope that in Fluora’s future, one can sync the beautiful light displays with Headspace meditation sessions, Spotify playlists, Peloton workouts, and more. Your magical LED Fluora houseplant/lamp boasts 15 individually addressable LEDs per leaf, enabling animations that swirl, pulse, and twinkle, as well as a mobile app that brings the magic to any given mood, providing customizable control over hue and colour with a variety of patterns. #Blog
Contemporary Art History 101 – What is the Deal with Restitution?

#News & trends
.ART Google Trends Watch VI: This Summer is Fast and Furious on all Fronts

#News & trends
.ART Google Trends Watch V: Jim Morrison, Fireworks and Nick Cannon - AGAIN!
This website stores cookies on your computer. These cookies are used to collect information about how you interact with our website and allow us to remember you. We use this information in order to improve and customize your browsing experience and for analytics and metrics about our visitors both on this website and other media. To find out more about the cookies we use, see our Privacy Policy.