Adopter stories: «Life in a big city and the changing fabric of our urban environment are my inspiration» When you look at Ian Berry’s pictures from an arms’ length you might not even realise you are looking at many layers of… jeans. The popular British artist, previously known as Denimu, has exhibitions around the globe and has been featured on international media – like the material itself, Ian’s work has proved to be quite universal. One of Ian’s favorite topics is urban daily life, which he paints in tones of blue. .ART talked to Ian about the creation of his technique and style, his incredible loyalty to it and his latest solo show in London which was named a Top exhibition by Fad Magazine, Londonist and on the BBC.

When did you decide to be an artist? Tell us a little about your creative path.

I must have been around four. However, I went to university to study advertising – but it was an ideas course where all we really learned is how to try and think differently. I worked as an art director in advertising for three years. We were creating conceptual ideas but kept pushing the ideas further than first thought. At uni and then while working as an art director, in London and then Sydney I was working on technique with denim on the side, and then it took over, literally like denim only does. 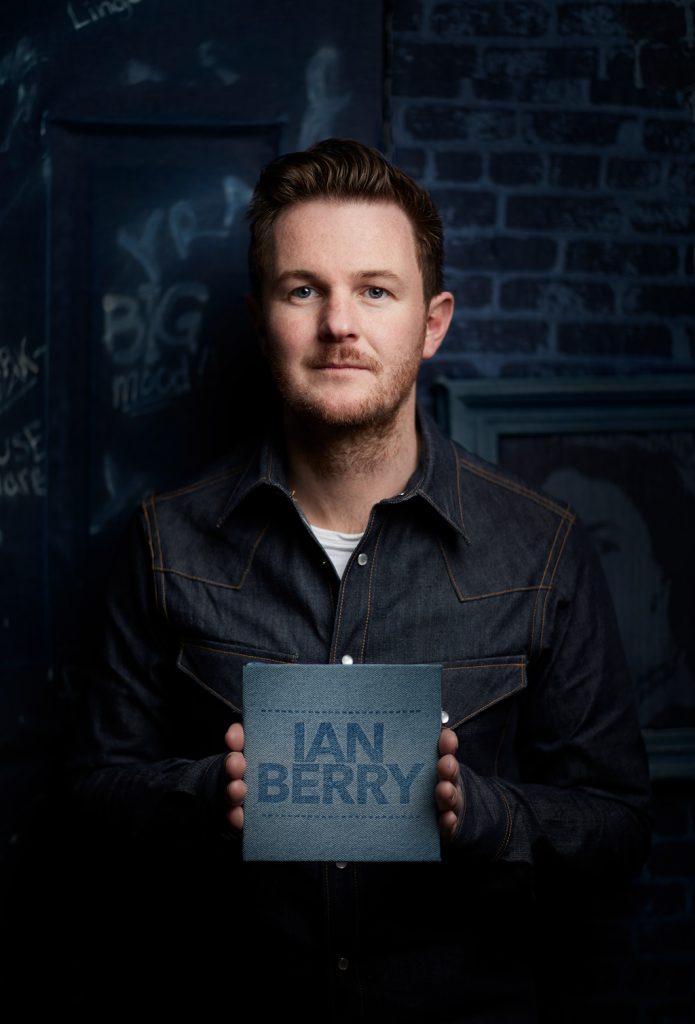 What made you decide to use denim? You must be aware that it looks like you’re obsessed with it. Is it a love story?

Actually, I am not one of the denim heads who love denim and it didn’t start that way for me. But yes, I am now kind of obsessed with the material in a different way. It was 2006 when I graduated from university and started to work with jeans just because I thought denim would work well with different shades, and it is a pretty cool material. Later I realised what kind of a material it is. People around the globe wear it and feel comfortable with it. It’s a symbol of our times, what could be better for portraying contemporary life? Denim is also a very democratizing material, people wear it regardless of income, race, nationality…

I love the material because everyone can wear it, and most do. I’m edging closer to being a ‘denim head’ and appreciating the material and jean like they do, but that is not connected to my art that much. It is an art, and certainly a craft on its own and one that I have totally grown to respect – but in general the beauty about jeans is that you don’t need to be an expert to feel comfortable wearing it and enjoy the experience.

I have piles of denim of different shades in my studio: my friends’ jeans, jeans from charity shops, donations from denim brands and mills.

How did you develop the technique?

When I started, I had no reference point, I had to learn by trial and error. There were no books about it, no guides for dummies! And over the 14 years that I have worked with it I am still learning more and more. The way I use denim I push and push to push the material to almost not look like the material, to not see the denim. To make it like a blue toned photograph or painting.

When people look at my work, they usually don’t realise what it is. I like to play with the perspective and create the feeling of being able to walk into the picture with a three-dimensional effect.

Your artwork looks like something painted, but it’s all denim. How exactly do you do it? How do you manage to use so many shades?

I do what painters usually do – play with the light and the dark. I have piles of denim in my studio: my friends’ jeans, jeans from charity shops, donations from denim brands and mills. My warehouse is organised by colors and it is growing bigger and bigger, so I can use a lot of shades.

My works are based on my own photographs. It is better and easier to work from a good photograph and one where I have played with the light. I then take from my studio, which has a good few thousand pairs of denim several shades to get a pallet of light to dark denim, that also blend in to one another. 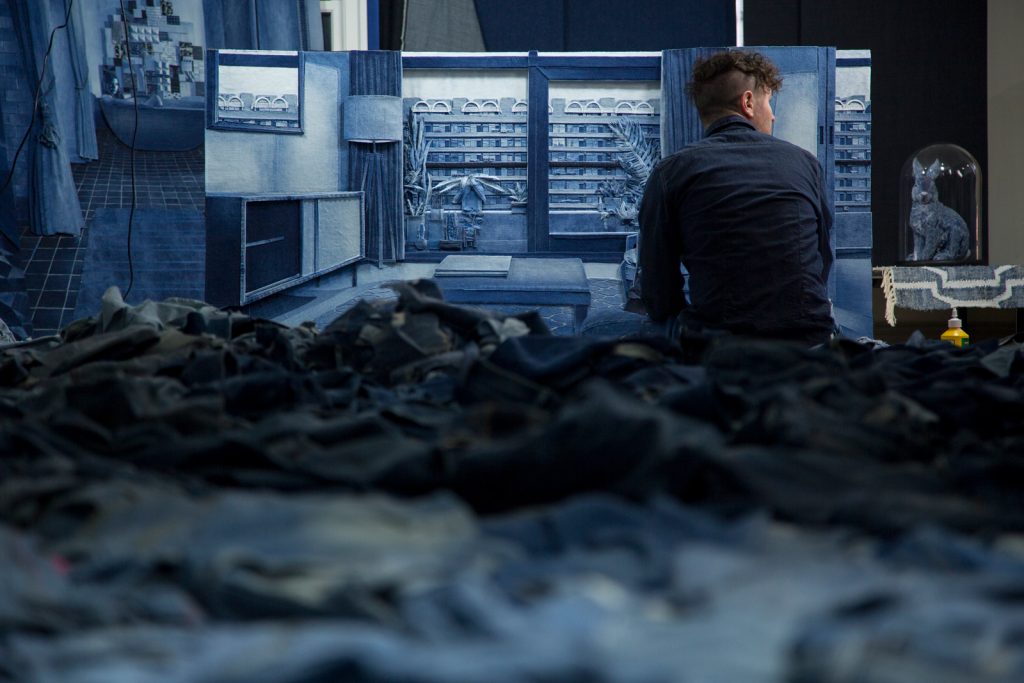 You need a lot of patience to put together all these tiny pieces! How long does it take for you to produce one picture?

Well, after 14 years… my patience levels are declining. It can often take me a month to make one picture, usually I work about 16 hours a day and it is now taking its toll and patience is getting thinner! But while I thought I would go more abstract, I think what many value in my work is the time they see it took to make. It’s not the best for me that I can only make so few pieces a year as I want many people to see the real thing.

In some ways I’d be better off getting a six-pack and posing next to my work.

What about your collaborations with well-known brands?

I have done a few, but only about one per cent of what has been asked. Many of the brands that have asked me to collaborate with them are obviously denim ones. My own work has done well, and I don’t need to do commissions, and actually, I have to really believe in something to do it. Collaboration is a rather small part of my work.

I’ve made a piece for Ray Ban to launch their denim sunglasses (one of the reasons I agreed to it was the opportunity to work with Debbie Harry and Blondie – who when I first started messing around with denim were my first trial!) and the Pepe jeans Flagship store in London. I’ve had some interesting collaborations with musicians too. Tommy Kessler, the guitarist of Blondie is still wearing my jacket after about 6 years!

Have you ever thought of using another medium?

Actually, I’ve started thinking about it a couple of weeks ago because I think I’m falling out of love with denim. I think I will re-find it and there is still a lot of things I want to do with jeans, as they take so long, I rarely get around to what I have been wanting to do for years.

What is your favorite work?

While I’ll never name an individual piece, one of my favorite body of work is «Behind Closed Doors» where I contrasted almost Elle Decoration home style settings against a lone character, and that juxtaposition resonated to many in the gallery. That connection to many people meant a lot to me. Not many people realized, but while the person portrayed wasn’t me, it was.

While I’ve done a number of high-profile portraits, I want to put that kind of work away as I have some big plans for the future. In any case I’m prouder of my other collections.

My latest London exhibition «Hotel California» is something I have been working on over the last year and technically I tried to push to the next level, when I pushed the material to depict water. The exhibition opened this month in London and has gone down really well (it sold out in the first day).

My work isn’t all about it being denim, and while it often looks at community, I also set myself the challenge of using denim in a way that it no longer looks like denim, it becomes photorealistic. For this project it was a challenge to turn denim into water like in the past… metallic objects that shine like launderettes, or a polished bar top. Making quite a dull material shine.

My idea of happiness is Dali being brought back from the dead. 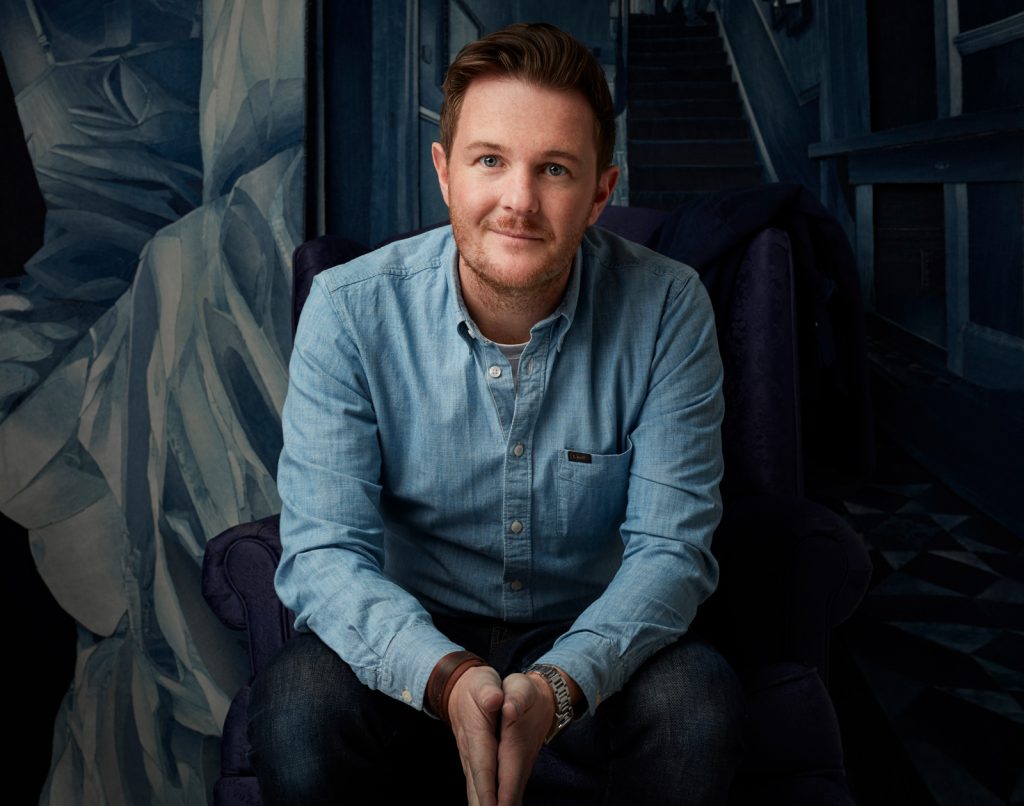 Where do you find inspiration

Initially denim was associated with the US and the history or rural work and mining, but now it’s more about the daily urban life, so it is the main source of inspiration for me. The loneliness in the big city, the urban street art and culture. I’ve portrayed big urban centres like London, New York and LA, but they have to be places I know. Many years ago, I did the area in Sweden I lived in, that covered the Skane region and across into Denmark with Copenhagen.

Why did you choose to have a personal website while having very successful social media accounts?

Oh, I never really thought I had a successful social media (laughs).

I actually don’t think this is many followers and I haven’t really focused on social media. My work isn’t made for online, it doesn’t really look good on that small screen. Besides, I’ve had a website for longer than social media has been around. While many people may now only look at social media and yes, it’s like another website, I still think key people will focus on the website.

In some ways I’d be better off getting a six-pack and posing next to my work. Don’t get me wrong, I know the benefits of social media, I can follow and be in touch with other artists I admire and am friends with, but the race for numbers is often silly. Would I prefer 100,000 followers of a gallery that can help me live as an artist? It’s a big balance really, and what I do like is that I have a really nice community of people that seem to really enjoy my posts and many people have become friends that way. As with many things, quality over quantity.

An object you can’t live without.
My scissors, they’re now like an extension of my hand.

A character trait you value most highly.
Integrity.

Person (dead, alive or fictional) who influenced you the most.
David Hockney.

You have a minute face to face with Salvador Dali.
What would you say/do? Freak out, he’s dead, it would be too surreal…

What’s your idea of happiness?
Dali being brought back from the dead. Maria Efimova
is an orientalist who speaks Arabic and Hebrew. She spent a decade working with global media, shook hands with Benjamin Netanyahu and other political leaders. She is now taking a break from it all researching arts and philosophy.
#interview
Facebook Twitter #Blog
10 Female Trailblazers That Are Diversifying The NFT Art World #Blog
Don’t Wait Till Graduation – Get your Projects Out There Now!

#News & trends
Art Curator Grid: Digital Innovation in Art Award Nominee 2021
This website stores cookies on your computer. These cookies are used to collect information about how you interact with our website and allow us to remember you. We use this information in order to improve and customize your browsing experience and for analytics and metrics about our visitors both on this website and other media. To find out more about the cookies we use, see our Privacy Policy.